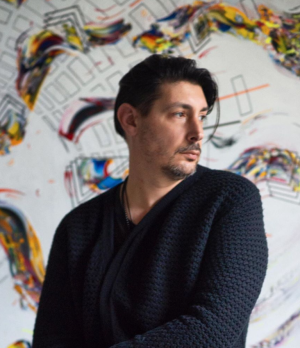 Alexandre’s grandfather Fedor Kholenkov, grandson of Alexander Dmitrievich Kononov and Anna Barbara Richelieu, was a Russian artist painter. When Alexandre was four, he asked his grandfather to draw planes and tanks for him but his grandfather didn’t want to go back to his memories of a soldier in the World War II, and instead taught his grandson the basics of drawing so he could draw for himself. Ever since, becoming passionate about drawing and painting, Alexandre studied Fine Arts and later settled in France in 2000.

Since 2005 Alexandre Beridze has been conducting regular exhibitions. The most notable was the personal exhibition at the Adler Gallery in Paris in 2011, after which, Bertrand Saint Vincent, the Editor-In-Chief of the famous French newspaper “Le Figaro” wrote an article on the front page on March 8, 2011. The same year – Beridze participated with the Adler Gallery in the Art Paris Fair and was mentioned by the Journal du Net among 10 most promising artists in France. In 2014, Beridze participated in Florence Biennale, where he was awarded the Sandro Botticelli prize honoring the distinguished contemporary artists. Multiple personal exhibitions followed in Paris, Monaco, Nice and Brussels.

Alexandre Beridze works in the style of Expressive Abstraction.

The art critics noted the rich color palette of Alexandre’s work, his ability to experiment with colors, different techniques and graphic images. In 2010, the artist formulated for himself his own art theory – “Lines of color” claiming that everything around us consists of color fragments and lines, which together form one picture. In 2012, Alexandre Beridze started to enrich the Color Lines Series by adding a content in a form of segments in between the lines what he called Intersections. Alexandre recalls his childhood, when he enjoyed looking at the changing view through a window of a moving train. “We are surrounded by the segments of images, a succession of shots forming a whole” says Beridze. He brings back his memories in the following video: 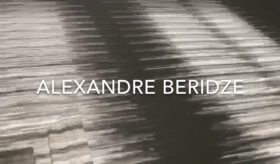 The Sacred Geometry, often described as the origin of all forms, is Beridze’s important source of inspiration. It is said that every natural pattern of growth or movement comes back to one or more geometric shapes. The molecules of our DNA, the cornea of our eye, snowflakes, flower petals, crystals, a shell, the stars, the galaxy we spiral within, the air we breathe, and all life forms are created out of geometric codes.

This is why, in 2014 Alexandre Beridze started to incorporate the geometric figures into his work to express his visualization of the world by color fragments and lines, segments of images and the geometry.

In 2016, Beridze began the series of work entitled “Reflection” and was noticed by a group of French and Russian scientists, mentalists, neuroscientists and philosophers according to whom Alexandre is the first artist to visualize and draw the thought process. “What has always seemed to be the property of philosophy alone – the reflection, the attention, the subconscious, the impulse of life – became available to vision thanks to Beridze’s art” – say the scientists.

Beridze’s art inspired the scientists to numerous essays and studies of his work, such as “Figurative mental – the art of Alexandre Beridze”, by French mentalist Jean-Louis Tripon. Alexander Poustovit, Doctor of Philosophy from Kiev, described Beridze’s art in his study, “Alexandre Beridze – Portrait of a thought”. Maria Falikman, Doctor of Psychology, Head of the Department of Psychology at the Higher School of Economics, National Research University in Moscow, wrote an essay; “The Mental Figurative of Alexandre Beridze and the metaphor of consciousness”. Jean-Louis Tripon and Beridze published a book “Discovering our mental life” – “A la decouverte de notre vie mentale”, that was presented in the book salon in Paris in 2018.

‘There is a permanent kaleidoscope in front of our eyes, and the beauty exists only in the soul of a person who watches.’